Archive for the tag “Robert A. Kroelinger”

Relay for Life Wash-Out, Or Not

The local organizing committee worked hard to pull this event off, but lightning, thunder, and rain thwarted attempts to run the usual all-night Relay.

Volunteers started signing in Relay teams at 4 pm, but dark, threatening clouds hung in the sky above us. It was not a question of if it would rain, but when it would rain and for how long.

Local South Jersey Channel 40 weatherman hero, Dan Skeldon, warned that we would have intermittent thunderstorms and rain throughout the evening. Still, we signed in teams and watched the skies. We advised teams not to set up their tents, but a few intrepid groups managed to get theirs up despite the theatening weather.

Thunder and lightning flashes became more frequent, and the rains began, so we moved inside the Ocean City Civic Center to wait out the storm. 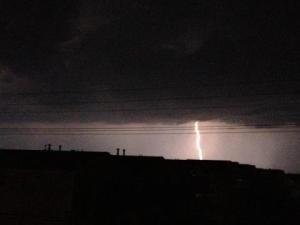 The crowd inside dwindled a bit as some of the Relayers called it quits and left for home. The rest of us participated in the hastily reorganized, but memorable, opening ceremonies. 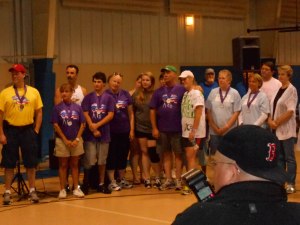 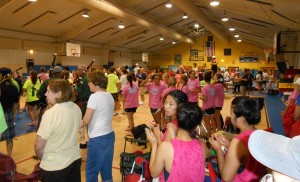 Within the hour, the rain abated, and Relayers began to walk the track. A number of teams (mostly the teens) put up their tents on the football field.

My team, the NJ Krewe du Kroey, departed for local headquarters a few blocks away at the first signs of thunder and lightning but made their way back to join me on the track as soon as the rain stopped. Several members of the team decided to stay home and collect those long dormant dust bunnies under the beds that were now demanding immediate attention. Oh well, their loss.

The braver members of the NJ Krewe du Kroey

While the NJ Krewe du Kroey team dawdled in a warm, dry house, I talked with photographer Brian M Richards. At first, I thought he was with the The Press of Atlantic City, but when I talked to him, he revealed that as a volunteer event photographer, he goes to seven or eight Relays a year, takes pictures, and posts them online for the American Cancer Society (ACS) and Relay followers. You can find more pictures of the Ocean City Relay here.

Brian choked up, and his eyes reddened and filled with tears when I asked him why he went to so many Relay for Life events. “I have lost nineteen family members to cancer, including my mother, father, and youngest brother. Coming to Relay for Life and taking pictures helps me remember and honor them. Cancer is a terrible disease, and this is my way to fight against it.”

Later, I saw a familiar Relayer, Jimmy Walker, walking the track in his HOPE Relay for Life T-shirt. Each year we see Jimmy at the Ocean City Relay, and he faithfully walks all night long despite having to walk with a cane. Just his presence makes us smile and encourages us to complete more laps than we had originally planned to walk. We admire his stamina, his determination, and his loyalty to Relay for Life.

I asked Jimmy why he participates in Relay for Life, and he responded with a broad smile, “I do this because I want to encourage others in their fight against cancer.”

A primary function of the Relay for Life is to raise funds for cancer research. Each team gathers sponsors and donations before the Relay, but many also do on-site fundraisers. Our team planned to do face-painting, sell popcorn, and do the Great PheeBee Blueberry Funnel-Cake-in-the-Face-Fiasco-Fund-raiser. These on-site fund-raisers for the Krewe were #EpicFail, not because of lack of effort, but because that thunder and lightning storm kept battering us.  (Anyone have any ideas for what to do with 100 bags of popcorn we couldn’t sell?)

Because the Relay crowd had thinned out significantly, we decided to save that delicious blueberry funnel cake for another fund raising event. Then we thought we should just eat it on the spot. Hmmm. Where did it go?

Other teams had fund-raisers planned, too. Delicious looking sandwiches, cupcakes, and boardwalk pizza appeared for sale at tables around the track. Food always makes for a good fund-raiser.

One twelve-year-old boy designed a “Candyland” theme for his fund-raiser. This site was popular with the younger members of the NJ Krewe du Kroey who stopped by to ponder the choices. Ten pieces of candy for $1.00. What a deal and for a good cause besides! What parent (or grandparent) could argue with that?

MiMi and her stash of penny candy.

But the rain was not finished for the evening, and dark clouds once again rolled over the Ocean City High School football field and track. And once again, Relay activities moved inside the Civic Center for the remainder of the event.

While the rain definitely dampened the Relay, it could not snuff out the spirits of the Relayers. Talk has already started about next year’s Relay! Maybe you can join us. We have asked Dan Skeldon to reserve better weather for us.