NaBloPoMo 8: WANAFriday: What Would I Do?

NaBloPoMo=National Blog Posting Month. Challenge: Write a post a day in November.
…
WANA=We Are Not Alone, a group of bloggers who provide mutual support for our writing and blogging efforts. Shepherded by by Kristen Lamb.
WANA Challenge: Write a #WANAFriday post every Friday with a prompt posted by one of our members.

How did the last book you read change you, or not. What do you want from a good book?

In recent weeks, I have posted several reviews on books I have recently read:

I found each of these books to be well-written and each had a significant message.
I wouldn’t say that these books changed me, but I must admit that I have thought about their messages a number times since finishing them. How would I hold up under these circumstances? What decisions would I make when faced with these incomprehensible challenges?
…

In The Red Kimono, a Japanese family living in San Francisco in 1941, faces discrimination, character assassination, and brutal loss of freedom through no fault of their own.
The story, written by Jan Morrill, relates events that happened in her own family’s world. In reading this book, you face the reality of war-time human interactions and shake your head. How could this happen in our own country? Both major and minor characters struggle with the complexities of a world gone crazy with fear and hate. The characters each learn something in their struggle to survive in their pain and suffering. And the characters have lessons for the reader, too. It is a powerful story, beautifully told.
… 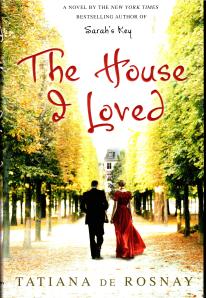 The House I Loved by Tatiana de Rosnay is historical fiction, set in Paris, France in the 1860s, when a powerful government under Emperor Napoleon III  decided to modernize Paris by tearing down entire quaint neighborhoods and rebuilding with grand boulevards and modern architecture.
This touching story relates how people from these intimate neighborhoods coped with the change: the young and realistic coped and moved on; the elderly suffered and struggled with overwhelming change in their lives.
Rose Bazelet decided to fight the modernization incursion in her little neighborhood in her own way, and in the meantime, she confronted long-held secrets. The book, written in letters to her late husband, Armand, describe the horror of the destruction of near-by neighborhoods. Soon the destruction reaches her own dearly-loved neighborhood. It’s coming closer and closer to Rose’s house. Now it’s time…
Tatiana de Rosnay, named one of the top three fiction writers in Europe in 2010, wrote NYT  bestsellers Sarah’s Key and A Secret Kept.
…

M.L. Stedman’s book, Light Between Oceans, presents a compelling moral dilemma for a young, childless couple, Tom and Isabel Sherbourne, who have suffered multiple miscarriages in their short marriage. Isabel’s emotional well-being is tied up in these miscarriages.
The lighthouse keeper has emotional problems of his own dealing with his memories of battles in Europe in WWI. He was one of the lucky ones who arrived home still in one piece, but his memories of battles and close friends who died there, torment him.
Now living on an isolated lighthouse island off the coast of Australia, the couple discovers a dinghy on the beach with a dead man and a live baby in it. How could this be? Is it an answer to Isabel’s prayers and pleading for a child? They can’t possibly fathom why, but here is a live baby that needs care. Is it their responsibility to care for this baby? What is their responsibility in this situation?
The decisions they make have long-ranging consequences. This book is both compelling and heart-breaking.
…
Why did I like these books?
1. Historical fiction (or books with historical settings) are among my favorites. I love reading about other times and other places.
2. Each one of these books has a compelling story, with complications that challenged the main character’s (and even minor character’s) whole lives and belief systems. These books raise many questions:
How do people react when their worlds fall apart?
Do they rely on their past moral instruction, or do they make it up as they go along.
What are the consequences do they face when going with their hearts and not their reason?
How do people cope with tragedy in their lives? Do they stand up to and go on? Do they fall apart?
What character traits belong to each group?
Would we be like this person or that person?
3. These books give many hours of pleasurable reading, although the tension, at times, runs high.
We don’t know how we would react in these extreme situations, but we hope we would act in accordance with our own long-help beliefs, values, and principles.
The Last Meow
Yes, Missy Jan, I know you like to read, but could you just let me finish my breakfast in peace? Please? I have a busy day scheduled. After I eat, I will play, sleep, then eat again. Let me get started!

6 thoughts on “NaBloPoMo 8: WANAFriday: What Would I Do?”